McGarrity’s crime novels take place in modern New Mexico, with law enforcement officer Kevin Kerney as the protagonist. The settings are vividly evoked and range from the Tularosa Basin and Lincoln County to Hermit’s Peak, although many take place in Santa Fe. “Hard Country,” “Backlands,” and “The Last Ranch” form a sweeping trilogy tracing the Kerney family’s history in New Mexico from 1875 through the end of the Vietnam War. A ground breaking prequel trilogy, all three books are set on the Tularosa Basin of south central New Mexico.

With the publication of Residue and Head Wounds, McGarrity concluded his Kevin Kerney crime novels. His newest outing, The Long Ago, is a spinoff to the series set in the mid-twentieth century. A stand -alone crime noir novel will follow. 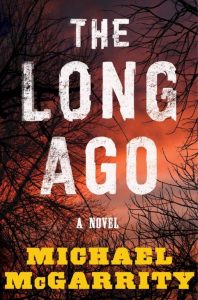 In the early 1960s, a soldier returns from Vietnam to his Montana home in search of his missing kid sister.
In this riveting story, the broken lives of a brother and sister are tenuously held together by their childhood fantasy of The Long Ago, a faraway place where only happiness and tranquility reign. To escape his dysfunctional family, Raymond Lansdale joins the army and finds a career filled with purpose and adventure. But recent news of his sister Barbara’s disappearance brings Ray home determined to find her before he must return to duty. He embarks on a search that takes him from the majestic Montana ranchlands to the glittery mean streets of LA, and back to the jungles of Vietnam, where he’s forced to confront his worst fear. What if Barbara’s search for The Long Ago ended in a shallow, unmarked grave, not the exciting, carefree life she’d once imagined? The Long Ago is a richly crafted spinoff to a body of work that continues the Kevin Kerney family saga.

What People Are Saying About Michael McGarrity’s American West Trilogy

Hard Country is awesome in its scope.

A compelling and richly imagined epic told by a master storyteller.

Hard Country…is a ‘Western’ in the sense that Lonesome Dove was a Western. It transcends the genre.

McGarrity is an accomplished storyteller, and he writes with clarity, perception, and authenticity.

McGarrity’s trilogy achieves an encompassing history that is real, heart-stopping and harshly beautiful.

Backlands is a coming of age story….An epic novel with a grand sweep of the West.

A well-rendered neoclassic tale of the Old West, worthy of a place alongside Lonesome Dove and Sea of Grass.